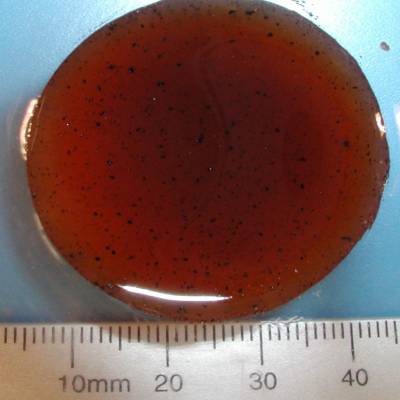 "Organic Vanilla Concentrate BS" is a dark brown, aromatic, slightly viscous extract from organic vanilla beans based on organic syrup. The brown-black particles clearly visible in the concentrate originate from the vanilla beans and are a desirable mark of authenticity. Naturally extracted vanilla accounts for only a small proportion of the volume processed worldwide. 0.1 to 0.3% organic vanilla concentrate in the recipe provides optimum, characterful flavor rounding. It is used very successfully in ice cream, cookies, vanilla crescents, pancakes, muffins, etc., for example. Our organic vanilla concentrate BS 90.025 is not based on alcohol but on a universally applicable organic syrup.

Things to know about organic vanilla:

In 2016, the prices for vanilla beans rose massively, but demand had not changed much. This was due to crop failures in the main producing country Madagascar and speculative trading. Madagascar and especially the island of La Reunion (formerly "Ile Bourbon") are now the main producers of the extremely popular spice. Originally vanilla came from Mexico, other important producers today are: Java, Tahiti, India, Zanzibar and the Seychelles.

In the tropical growing areas, the plant is planted between September and November and it takes 3 years for the plant to flower for the first time. The tall plant only flowers for one day and must be pollinated within 12 hours of the flower opening to produce a capsule fruit which takes 9 months to ripen.

A brief history of the plant. 4000 years ago, the Aztecs were already cultivating vanilla orchids in what is now Mexico. The vanilla spice they produced was also used as a means of payment. After the discovery of America, the Spaniards guarded their trade monopoly on vanilla for 300 years before a few seedlings of the orchids were planted on "Ile Bourbon" (today La Reunion) and Java. It took time for the plants to bear fruit, however, because the necessary pollinators (bees and hummingbird species, from Mexico) were lacking. In 1837, a Belgian botanist discovered that the flowers had to be pollinated artificially (by hand). This made the cultivation of vanilla outside Mexico possible.